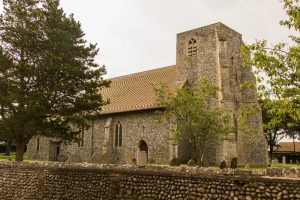 MESSAGE FOR ALL LOCAL CHURCHES

Local churches are now beginning to re-open for private prayer:   Trimingham Church is now open. Church services will not resume yet, but this website will aim to keep you updated when things begin to get back to normal.
The Rector, Ministry team and congregations are being asked to pray for our nation and world, while there are no services. Morning Prayer and a Sunday service are being said privately in people’s homes to maintain the prayer life of the Churches. These services can be obtained via the weekly poppyland bulletin. Please contact the administrator if you would like a copy:
Tel: 01263 833790 Email: poppyland.rector@gmail.com
And of course we must carry out the government advice of hygiene and social distancing to stop the spread of this virus.

Listen to the Bells of St John the Baptist’s Head! Click at the bottom of the following webpage:

Induction Service for our new Rector, Revd Siân Reading on Sunday 17th November 2019 at 4pm at Overstrand Church. All welcome. 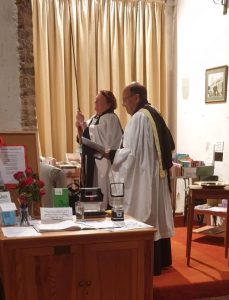 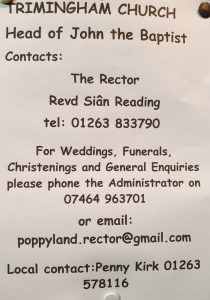 Trimingham Church service times are listed in the Trimingham News, which is to be found  under News Letter at the head of this website. See the latest issue.

The Church of St John the Baptist’s Head, Trimingham

The spireless parish church of Trimingham is called St John the Baptist’s Head. This strange dedication to John the Baptist’s head dates from the medieval period. During this time a life size alabaster head of the saint was kept at the church and pilgrims in this country came to the church to the shrine altar, rather than make the journey to Amiens Cathedral where a relic said to be the real head of John the Baptist was kept. 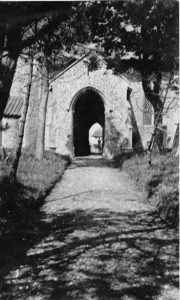 head did not survive and although it is unknown exactly what happened to it, it has been suggested that it was probably destroyed by Anglican reformers as a result of the 1538 Injunction against images during the reign of Henry VIII. Another theory is that the head was destroyed as a result of a further injunction which was rigorously imposed in 1547, during the early weeks of the reign of Edward VI. Today an Alabaster head survives in the Victoria and Albert Museum and it is thought that the head at Trimingham was exactly like the head in the museum collection. To this day, the nearby village hall is called the Pilgrim Shelter as a reminder of Trimingham’s past as a site of pilgrimage.

The church has a short tower which is thought to be unfinished. It has heavy buttresses on the west elevation which suggest that a fault in the construction of the church may well have been the reasoning for the unfinished tower. The nave to the east cuts around the buttress to embrace it. This peculiarity may be partly the result of a restoration by Thomas Jekyll in the 1850s. Pevsner states in his survey book that Thomas Jekyll completely rebuilt the nave of which the most notable feature is the way that the tower buttresses on the east side project into the nave.

The church’s rood screen is very small with four figures on either side of the entrance to the chancel. The figures are St Edmund with his arrow, St Clare with her book and monstrance, St Clement with his anchor and crozier, and St James in his pilgrim’s robes. On the south side are St Petronella with her book and keys, St Cecilia with her garland of flowers, St Barbara with her tower, and St Jeron with his hawk. The east window of the church is credited to H Wilkinson and dates from 1925. The window depicts Christ in Majesty flanked by St Michael and St Gabriel, with the symbols of the four Evangelists surrounding them.

With grateful acknowledgement to the compilers of Wikipedia  https://en.wikipedia.org/wiki/Trimingham 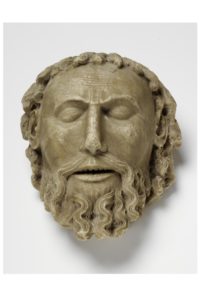 Alabaster head of St John the Baptist c1440  (by permission of the Victoria and Albert Museum, London) 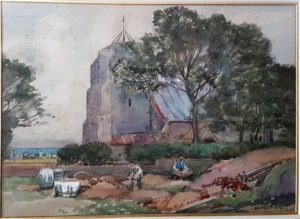 A watercolour by the late Sir Alfred East showing the Church in course of restoration many years ago. It was exhibited at Buenos Aires as an example of English Art and presented to the Church after the artist’s death by a friend of the Reverend Reginald Page.

See the Arts page on this website for more on Rev Page and Trimingham art. 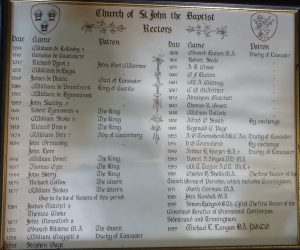 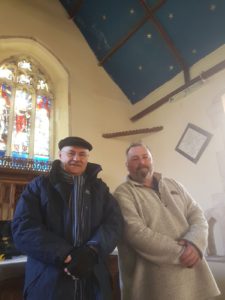 Keeping an Eye on the Chancel Vaulting

The vaulting of Trimingham Church’s chancel has an unusual feature in its pattern of stars in a night sky, probably created by the Rev Reginald Page in the 1930s. However, Architect David Lemon (on the left in the picture) has for some time had concerns about the state of the roof above it. The South-Eastern corner of the vaulting has developed a bulge in the angle of the ceiling – if you stand in the doorway when you enter the church, it’s down at the far end on the right. On Saturday 24th February David met historical building specialist Terry Moore in order to begin monitoring the vaulting to see whether there is continued movement caused by deteriorating timber. The photographs show our Church Architect (who thankfully has a good head for heights) drawing a grid of measurements on the wall below the bulge so that further slippage can be easily gauged. 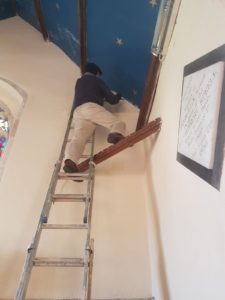 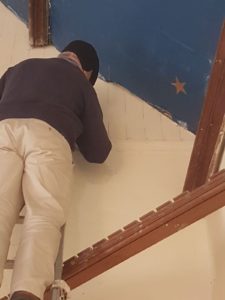 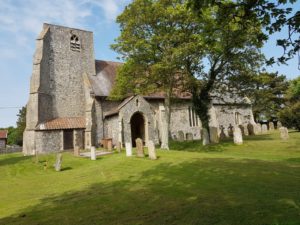 On Sunday 1st July 2018, a memorial service was held in Trimingham Church for Donald King whose ashes were brought over from his home in Chicago to re-join Doreen King’s remains in our churchyard.  The following is the letter of appreciation sent to Lynn Padmore by the relatives:

What a special day you and the Trimingham parishioners made for Eleanor and I.  We both felt that the service was so beautiful and touching.  And everyone was so welcoming.

I cannot thank you enough for honoring my father’s special requests.  I am very clear that not everyone would have been so amenable and so your acts of kindness are so appreciated.

I miss my family deeply but am glad that they are in the care of such amazing people and that they remain in a place so dear to us as a family.

Everything about the day was beautiful and so much more than I could have hoped for.  Eleanor and I owe that to you and the Trimingham parishioners.  Please share with them our gratitude.

In peace, love, and thanks,

In Search of a Grave 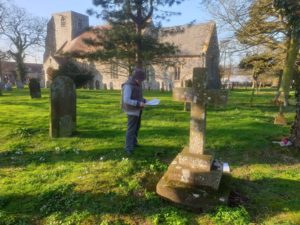 My name is Richard Lee from Albury, Australia and following my Cooper ancestry.
Your web site (See under History / A Walk Through Time / The Church) states that a tombstone in Memory of Thomas Thornville Cooper is at St John the Baptist’s Church at Trimingham.
The date used is 15 February 1878.
Thomas was murdered 24 April 1878
His brother Douglas was buried at Erpingham
death date 15 February 1898.
It strikes me that the 7 or the 9 in the dates might be confused.
I would love a happy snap of the tombstone to confirm my assumption.
Elizabeth and Emma both sisters are also possibly buried there as well.
I have letters from Elizabeth listing her address as Trimingham Hall via North Walsham 1898 and 1900. I would be interested if they have record’s at the cemetery and in what year.
Hope it finds you well.
Regards
Richard Lee

Thanks very much for your correspondence. I’ve been in touch with Dot Bradley over the weekend, and I’m attaching a photo of the grave in question – it’s in the form of a stone cross, showing its context in the churchyard, with Dot herself in the background. Though the inscription is a little hard to read these days, several years back Dot made a transcription of the words which appear on its two sides:
1 In loving memory of Douglas Cooper, 4th son of the late J.Ibbetson Cooper esquire and Elizabeth Douglas July 5th 1829. Burial No. 323. February 15th 1898 also of Thomas Thornville Cooper 8th son aged 35 years (Dot has inserted a ? at this point, indicating uncertain reading) Buried within the residency of Bhamo Burmah.
2 Elizabeth Louie 2nd daughter of the late J.Ibbetson Cooper, esquire and Elizabeth his wife, passed away February 5th 1905. Into thy hand O Lord.
Dot has given me some additional information: John Ibbetson Cooper was born about August 1793 in Arundel, West Sussex and was a Master Mariner, dying 2nd January 1866 in Castlemaine, Australia. He married Elizabeth Douglas on 29th August 1815 in Sunderland. They had 11 children – Elizabeth Louie was their 5th child (2nd daughter) and died in Bethel Hospital; Thomas was their 11th child. Douglas was born on 5th July 1829 in Sunderland.

The Burial Register states:
323 Douglas Cooper 17.02.1898 67 years W.Tatlock (signatory)
343 Elizabeth Cooper (Bethel Hospital) 10.02.1905 66 years A.O.Smith
(It’s possible, says Dot, that the vicar got the age of Douglas Cooper wrong – it very much looks as if he was buried at Trimingham, not at Erpingham, which is around 10 miles distant just off the Aylsham-Cromer road.)

The Carvings of Trimingham Church

A striking feature of our small Church is the carving in high relief by the Reverend Reginald Page, Rector of Trimingham from 1909 to 1923. The carving which enriches the Pulpit, the Reredos and the Sanctuary cupboard in the Chancel, the Priest’s seat and the Prayer Desk and four wall panels will repay careful study. They cover a long period of work. His last and it is thought the finest, “The Gethsemane” in the Chancel, was completed in his eightieth year, not long before his death in 1953.

The Reredos in the Chancel depicts the supper at Emmaeus and shows two disciples, believed to be Cleopas and his wife, with our Lord making Himself known in the “Breaking of the Bread”. Over the panel are bread and grapes and a pleasant carving of an Angel. The doors of the Sanctuary cupboard bear the Arms of the Diocese and those of the Duchy of Lancaster, Patron of this Living. 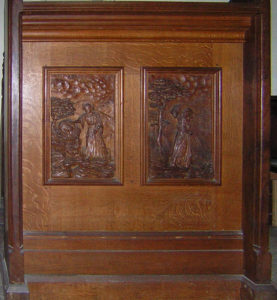 The Pulpit shows Jesus preaching to shepherds, women, children and Priest. The five loaves and two fishes, the fowls of the air, and in the background the sower and a ship on the lake are shown with wonderful clarity.

Reginald Page’s work on the Prayer Desk is especially interesting, with two front panels illustrating the Parable of the Lost Sheep. The desk end facing the Nave shows the Baptism of our Lord by St John the Baptist, with the Dove representing the Holy Spirit and Angels symbolising God the Father. The small detail includes crowds by the Jordan and the castle of Machaerus where St John was beheaded. By an ingenious manipulation the reverse of this carving shows the Legend of St George (modelled on that shown on the Rood Screen) with the maiden chained to a rock. The opposite desk end has a design showing a rose, a thistle and a shamrock. 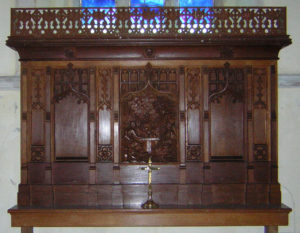 Of the three Memorial panels in the Nave, the 1914 Memorial depicts a dash across No-Man’s-Land in which Major Lash, the Rector’s brother-in-law, was mortally wounded. The uniforms, equipment and weapons of the day are all carefully executed.

The 1939 Memorial is a modern version of the Good Samaritan story of two soldiers in battle dress tending a wounded comrade, in the background the Samaritan leading the Ass which bears the wounded soldier.

The third panel is a scene from Corfu where the Reverend Page once served. In it can be seen the offering to our Lord in the market place of gifts of fruit and wine.

On the 14th April 1954 Reginald Page’s last carving was installed on the North wall of the Chancel and dedicated to his memory.

You will find further information on Trimingham Church on the History page above, under A Walk Through Time. There is also much more detail about Rev Page’s life and work in the Arts section of this web site, under Art of Rev Page. 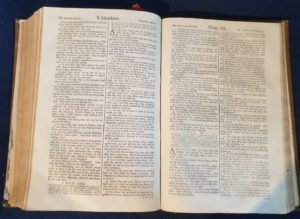 An early edition of the King James Bible once owned by Rev Townshend, Rector of Trimingham 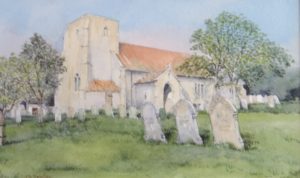 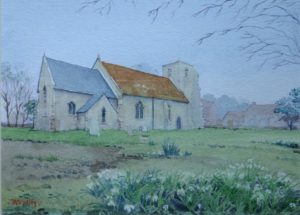 These works are published here by permission of John Bradley and remain his property. They should not be copied without his permission. 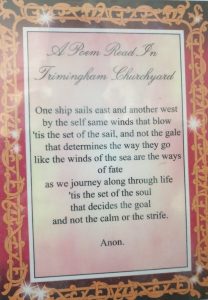