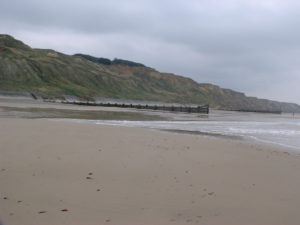 The Reef runs from Cley in the West to Trimingham in the East, where it slips under the clay just below the cliffs of Trimingham.  The Norfolk Wildlife Trust publishes its study of the great Norfolk Chalk Reef on its web-site, a link to which appears below.  In it, Trimingham’s importance as a geological transition-point is expressed in the following passage which appears near the end: 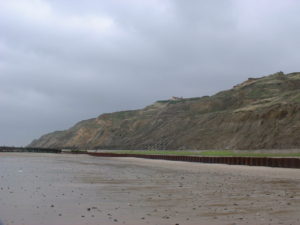 Trimingham – Chalk slips under clay, the end of the reef? At low tide bright, white chalk shows here at the water’s edge. The sand here is very fine and the chalk is very soft so it is hard for all but the toughest animals to gain a foothold on the reef which starts just beyond the end of the groynes.
This is a geological transition point, with the chalk slipping back under hard clay as it runs to the east. The very mobile sand moves with the tides polishing, surrounding and often covering the hard seabed. It is difficult to say where the reef ends as winter storms can reveal or conceal more chalk. 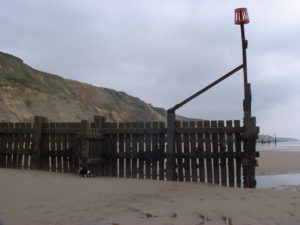 The clay to the east is an important habitat in its own right. Animals like mussels can form extensive beds on their own but flourish on a more stable seabed too. Such animal-built (biogenic) reefs are rich ecosystems and very important to the food chains that we and many other animals depend on. Delicate seabeds such as these are easily damaged and important geological formations can never be truly restored.