Photos (taken in 2019) and Commentary by Geoff Pardon

The cliffs here are the highest along the Norfolk coast, 60 meters (200ft) at Beacon Hill. And whilst there are no problems with flooding, the biggest issue is with erosion and land loss to the sea. This is not a new problem and it has been happening for centuries. All of the villages along this part of the coast have lost properties and many acres of land and the winding coast road has had to be diverted in several places.

The erosion process is caused by surface water filtering through the top sediment until it reaches the clay and chalk layers and then at the cliff face the top layers become unstable. The top layers eventually collapse and fall to the beach where the sea washes it away. The sea also erodes the base of the cliff, causing overhangs that collapse and this is also eventually washed away but at a much slower rate. The timber revetments were designed to prevent the sea from eroding the cliff base in this way, but it is almost impossible to prevent surface water draining through the top sediment.

The photos here were taken in December 2019 and clearly show the erosion process and the current state of the beach and cliffs. 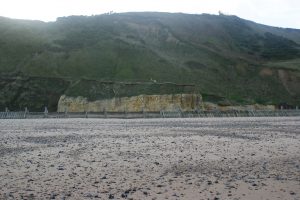 Little Marl Point at the eastern end of the beach. There were once two chalk outcrops similar to this. The other one was further west below Beacon Road and is now eroded away to beach level and only visible when the beach is washed away after severe storms. It was called Marl Point. 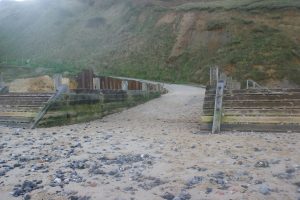 The beach access, known locally as The Gap. Originally a dirt track, it gained the tarmac surface as part of the sea defence work in the 1970s. 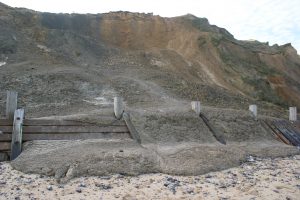 The foot of the cliff below the Trimingham House caravan site. It looks like ready-mix concrete! This photo was taken in December 2019 and in January 2020. A large landslide occurred here with an area the size of two football pitches sliding down the cliff and reaching to the low water mark. Within one week 50% of the material had been washed away! 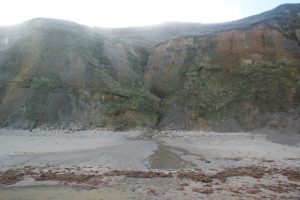 A freshwater spring below Beacon Road. This spring has been flowing here for decades. 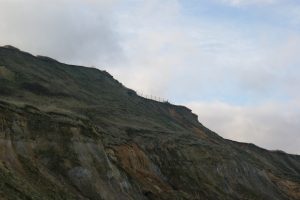 Below the “Golf Ball”. The perimeter fence of the old RAF site, seen here at the cliff edge, was originally 40 meters back from the edge! 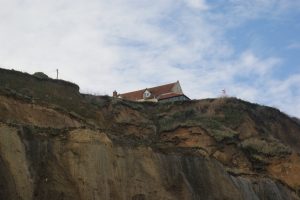 Cliff Farm “on the edge” and with unrivaled sea views! This is the last remaining property in the area once known as Low Street. 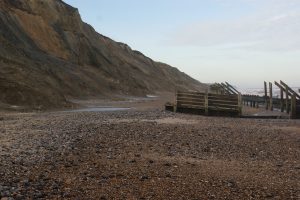 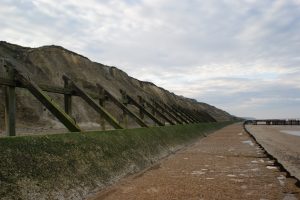 From a point roughly below Cliff Farm. The sea defence is constructed with a concrete toe wall on a flat promenade with a much higher wooden revetment. Much of the wood has now been broken by cliff falls and erosion by the sea. 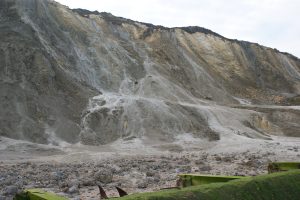 Water and liquid clay flowing from the cliff below the old Crown & Anchor site. 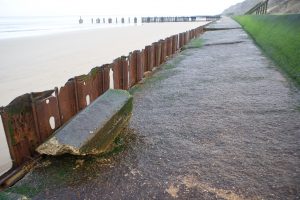 One section of the concrete promenade being undermined by the sea. This area never forms any beach and the defences are pounded by the sea at every high tide. 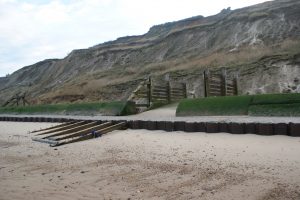 The remains of a once-planned beach access roughly below the Pilgrim Shelter. 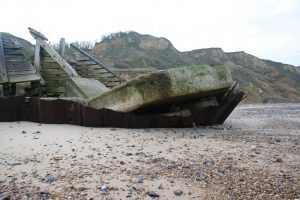 The power of the sea! This is at the very western end of the sea defence and the damage occurred here during the 2013 winter storm surge. 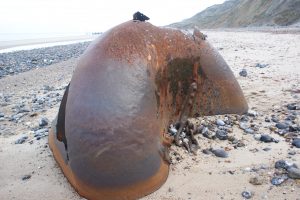 Below Watchtower Lane, at the western end of the beach, an old marker buoy. It washed up here about 30 years ago and now it marks a point roughly where Sidestrand beach begins.