Living on the Edge

The village of Trimingham 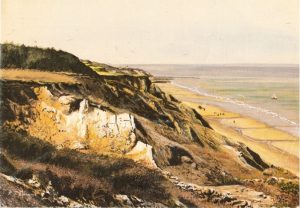 sits high up on the eastern end of the Cromer Ridge overlooking the North Sea. Almost within living memory it was an active coastal community, where steep tracks led down to the beach. These gave access to the small fishing craft scattered along the shore and to the marl-pits dug into the glacial clay at the base of the escarpment, from which lime was quarried and drawn by horses up to the cliff-top where a small industry of workers prepared it to condition the fields of local farms.

These days all but the slightest traces of these activities have been swept away by the advancing sea – or more accurately by the retreating land, for the ground on which Trimingham sits hides an active water system, which combined with the remarkable height of the cliff – up to 170 feet / 50 meters in places – makes for an unstable situation. If you walk along the beach today you can witness for yourself the tiny dribbles and streamlets which ooze from the cliff, as well as the remains of the tram-track which was used to build the substantial concrete and wood promenade and revetments installed in the 1970s to keep the sea at bay. Directly below the eastern end of the village, where once an offshoot of Trimingham known as Lower Street clung to the cliff-edge, rubble from several houses bears witness to the perils of geology.

Such calamities are very rare these days, and the actual experience of both residents and holiday-makers is that Trimingham is an exhilarating place to live or stay, a place where the sea fills the horizon giving an extraordinary sense of being at one with nature, but at the same time affording breathtaking views of modern ocean technology – with two distant wind-farms visible on a clear day, together with several gas platforms just on the edge of vision – and a fore-ground vista of enormous sea-going vessels navigating the currents close into our coast.