Also known as woodburning, although pyrography can be used on various materials, it is the art of burning using a heated element. I use a heated wire tip set-up, with various interchangeable wire tips to create the desired effect and detailing. 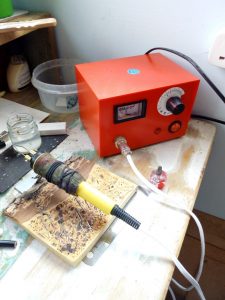 As you can see it’s pretty much like a soldering iron with different changeable tips, and with this unit I can control the temperature that the tips burn at, which in turn gives me more control of the finished piece of art being burnt ( a electric current passes through the wire tips creating a burning element) 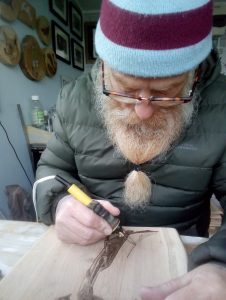 I use hardwoods to burn on as the tips can be too severe on softwoods and create what looks like burnt blob marks rather than detail, imagine a ink pen on blotting paper and this same spread effect is similar when the tip is applied too hot/on too soft wood. This is where controlling the temperature comes into its own, I can start by lighter detailing and work up to darker burn areas when needed. I will also use white paint to create highlights if it is needed.

Here you can see the 3 types of tips I have used on this Kingfisher piece. 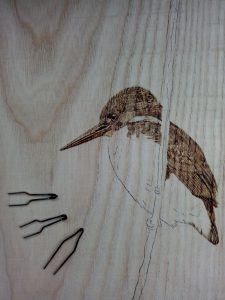 Since taking up the art of pyrography earlier this year (May 2020) I have become addicted to creating pieces of art using this technique, from wildlife portraits to military aircraft to movie poster/scenes. Work is available to purchase and commissions are considered. Here are some completed burns’. 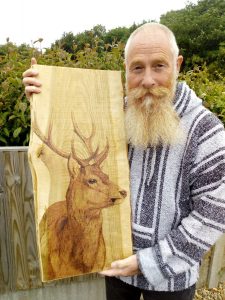 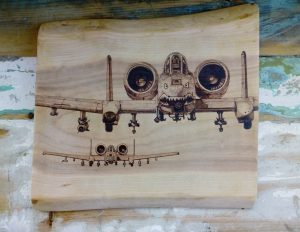 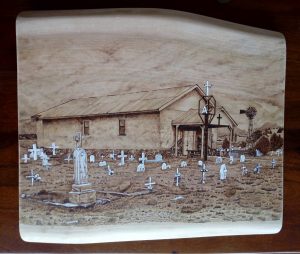 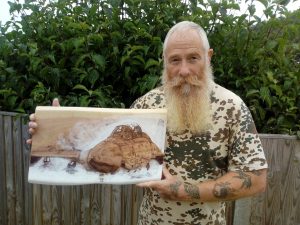 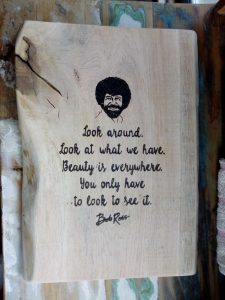 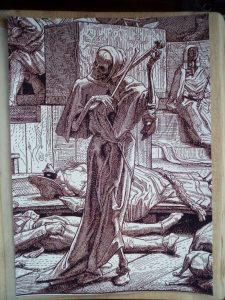 On this woodburning piece I was asked to portray the Skeleton from Alfred Rethel’s wood engraving. The piece of art by Rethel is also known as “Dance of Death: Death as Strangler”.  The piece refers to an event in Paris in 1831 with the first outbreak of Cholera.  Rethel was influenced by images of death in a lot of his work. 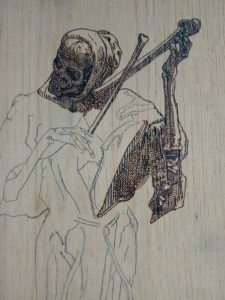 All through this ‘burn I kept myself to working in sections. I would map out where the lines and detail would go and then carefully burn it in. This was a real tricky piece to work on and I wanted to keep it as close to the original design as possible. 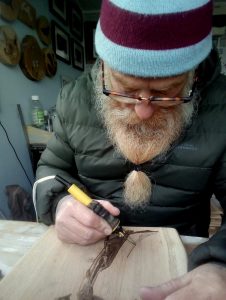 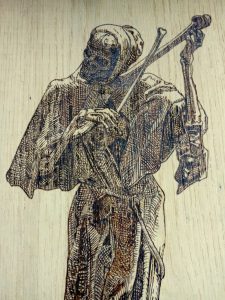 It was important to take my time and be careful I didn’t bleed the burn lines into the next row. I have no idea how many squares and lines are burnt into this study, but I do know it took me 15 hours to complete. I burnt it on a nice thick piece of oak which was pale enough to make the detail stand out. 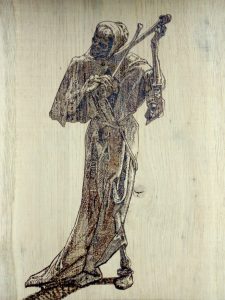 When I first drew this piece up for a ‘burn’, I posted it on social media and straight away a previous customer of mine contacted me to purchase it!!  I hadn’t even started so now the pressure was on not to make a mistake in this complex piece. The customer is a plane enthusiast and I burnt a Vulcan Bomber for him previously, but this time his wife contacted me for a Christmas present, so we decided between us that I would post progress photos on my instagram account that he could see, but every time I declared it was meant for my brother…cunning plan that worked as he had commented that he was jealous of my brother receiving it! And so the work began. 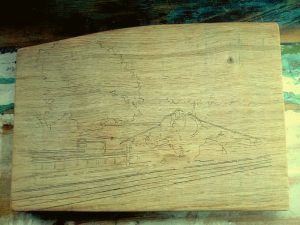 This ‘burn depicted a Harrier Jumpjet, during the cold war period, landing on a German Autobahn (motorway) this was iconic of the Harrier where it could land almost anywhere. It was a tricky one to work on as the reference photo was some years old and it had a lot of different depths of field to work on, some in detail and some out of focus almost, giving the whole piece a scenic image front to back. I decided to start on the jet itself first, this was the main focus area. 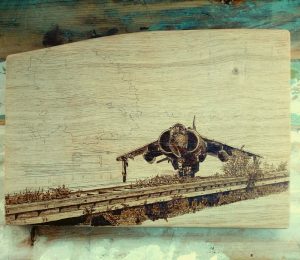 I then worked on the central reservation barriers, letting you know it was a motorway (autobahn) and not a runway! 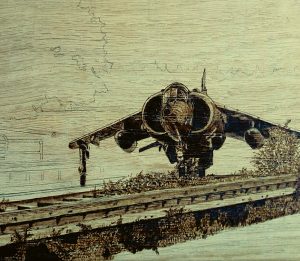 Then I moved on to the tree line behind, not detailing the trees too much so they stayed looking in the distance and didn’t compete for detail with the Harrier. This immediately gave it a lot of depth to the scene. 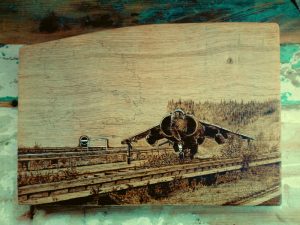 The large tree to the side of the carriageway was next and this had to be more detailed but not to detract from the jet, just enough that it sits behind. Finally I added a small amount of white paint to highlight just a few areas on the Harrier, road markings and signage which all added to the depth of the scene and made things ‘pop’. And the surprise worked a treat and was very much welcomed on Christmas morning. 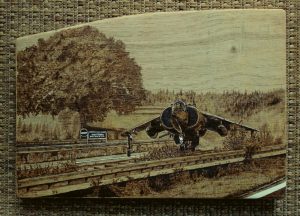 From metal birds to feathered birds, my next piece of work was a Bittern. I have painted quite a few Bitterns before and found their camouflaged plumage so nice to paint, this was the first time I had burnt one though!. Choosing a nice piece of oak I set about using one of my photographs for the work, burning the plumage onto the wood as opposed to painting would add to the effect. 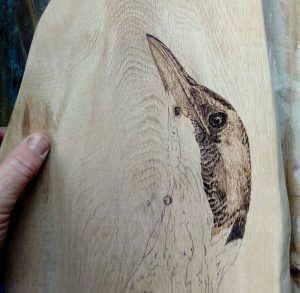 I started on the bill and eye, the eye almost has a reptile type look to it, that intense stare as the birds stay motionless whilst hunting in the reed beds, simply vanishing away if you take your eye off them, indeed when I have watched these stunning birds before, one can be a matter of feet in front of you, craning its neck up to the sky blending in amongst the reeds, this is where the streaky feather patterning comes into play, such a peculiar but fascinating bird. Starting on those streaky feather lines running down the entire length of the bird. I added some reed stems into the composition but not so many as to detract from the bird and the detail. 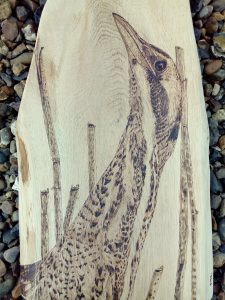 And finally the finished piece. For this burn I returned to aircraft with a double jet study, the Buccaneer and Tornado. From the 60s The Buccaneers were used as a British carrier-capable attack aircraft, notably an anti-shipping bomber. The 12 squadron Buccaneers moved into RAF Honington in 1969, later moving to RAF Lossiemouth in Morayshire during 1980. They were retired in 1993 after a long career. During the 1991 Gulf War, personnel from all three Buccaneer squadrons at Lossiemouth, including No. 12 Squadron, took part in Operation Granby, the aircraft’s first combat operation. They operated as target designators and it became common for each attack formation to comprise four Tornados and two Buccaneers. Upon retiring the 12 Squadron Buccaneers were replaced by the the Panavia Tornado, a twin-engine, variable-sweep wing multirole combat aircraft, jointly developed and manufactured by Italy, the United Kingdom and West Germany. All Tornado aircraft were due to be withdrawn from RAF operations by the end of 2015 but ended up retiring in 2018.

I decided to burn the Tornado first, initially it was going to be 2 Tornado jets but I was educated by my youngest brother on the connection between the Buccaneers and Tornado jets attached to 12 Squadron so it seemed fitting to continue with that, the Fox is used as the badge emblem. Progress on the Buccaneer