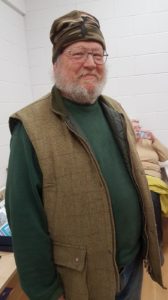 These pen and ink drawings are published here by permission of John Bradley and remain his property. They should not be copied without his permission. 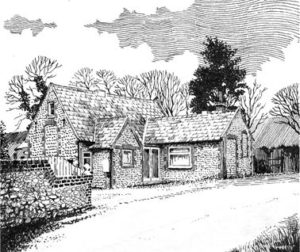 Buxton Hall
This property was the site of Trimingham School and Kelly’s Directory of 1892 refers to a National school (mixed) erected in 1847 for 60 children with an average attendance of 50. The school was supported by T.F.Buxton Esq. with Miss Charlotte Tuck as mistress. The school closed on 30th April 1932 and the pupils transferred to Overstrand School. 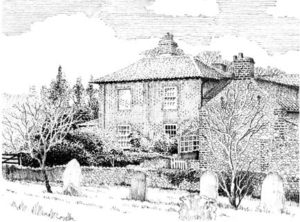 Church Farm
The property used to be known as Grange Farm. In the late 1890s the Farjeon family used to come to Trimingham for their annual holidays and stayed at Grange Farm. Mr H. Farjeon wrote a book entitled My Cricket Bag in which he mentions these holidays. His sister Eleanor is known for writing the hymn Morning has Broken. 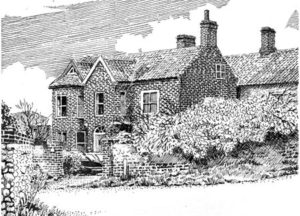 Old Rectory (previously Ingleside)
At one time it was run as a home for unwanted female children in approximately 1936.The children all had to work either in the house or in the garden. On a Sunday they used to march in a line up to Church. They all had different colours of the rainbow on and each one carried a dolly bag. 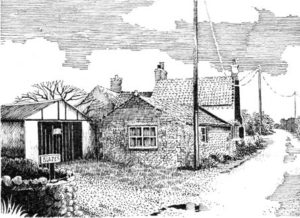 Blazes (The Hidden Cottage)
A three hundred year old traditional flint cottage converted from a barn that was part of a farm belonging to the Duchy of Lancaster estate. “Sou-West” was created from the other part of the barn and the farm house is now “Three Ways”. They all once had thatched roofs. The name “Blazes” comes from the enclosed garden being a regular sun trap in the summer months. 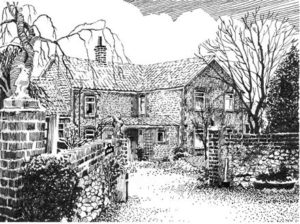 Cobbles
In the 1901 Census the property is listed as a Post Office run by James Randall. The 1912 issue of Kelly’s Directory records a Miss Mary Randall as sub-Postmistress, who married a Samuel Cubitt when she was approximately 55 years old. 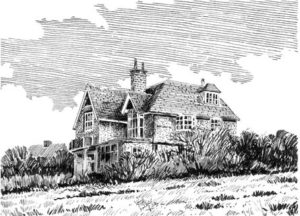 Cliff House
There is an undated postcard which shows Cliff House as a Convalescent Home, but no further details are available. The property was once owned by Major Pickford who was Headmaster of Paston College from 1922 to 1946 and in a book entitled A History of Paston College it mentions that “He was busy in many other things in his retirement at Trimingham, both in Church and local affairs, in music and archaeology”. 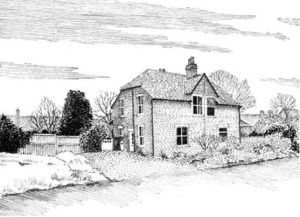 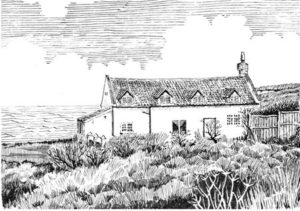 Cliff Farm
It is rumoured that this property was built for a mine owner and was at one time a magnificent property with four bedrooms and with chimneys at both ends and in the middle. There was also a cottage and a barn in the grounds, but these have been demolished. 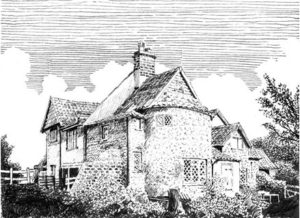 Rotunda
Rotunda Cottage, so called because of the shape of the north-east facing side of the house, was built in approximately 1800. From the mid 1800s until 1953 it was the family home of the Olley family. During the 1920s there was a huge cliff fall, and Charlotte Olley and her daughters provided teas at Rotunda Cottage for the many visitors who came to Trimingham to observe the erosion. 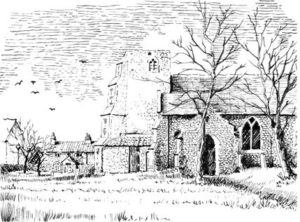 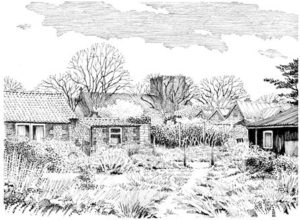 Rear of Pilgrim Shelter
It was built by Rev Page with help from the villagers he employed and was opened in 1935. It was initially used as a Men’s Club. However, it has also been used as a Post Office, as a temporary home, and as a base for the Home Guard, the Youth Club, and the Sunday School. It is still used for various functions for the village. 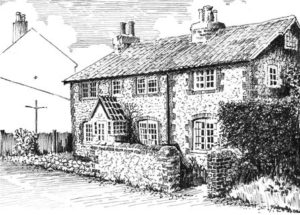 Pilgrim Cottage and Pilgrim Rest
Again these properties were built by Rev Page with help from the villagers he employed. Pilgrim Rest was often occupied by members of the Clergy who sometimes helped with services at the Church.