The Paintings of Rev Pag 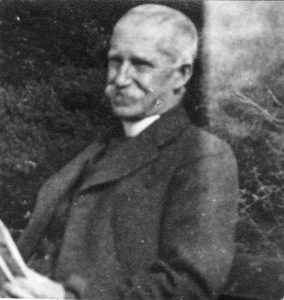 Rev Reginald Page, Rector of Trimingham from 1909 to 1923, was an accomplished sculptor who contributed beautiful carvings to Trimingham Church covering the period of the Great War and recreating biblical scenes. He remained in Trimingham during the years of his retirement, undertaking during the 1930s a series of building projects which included the Pilgrim Shelter and a number of cottages in the area opposite the Church, all designed in a very distinctive style. He was also a Director of his family firm, Briton’s Brush Company in Norwich. In his later years he dabbled in painting too, and luckily for us Dot and John Bradley succeeded in rescuing some of his works of art, a few of which appear below. Reginald Page died in 1953, having lived in the village both professionally and in retirement for a total of 44 years. 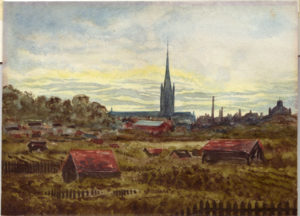 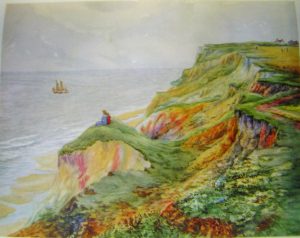 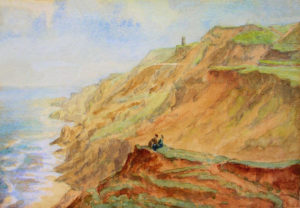 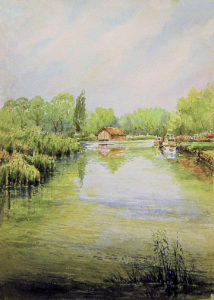 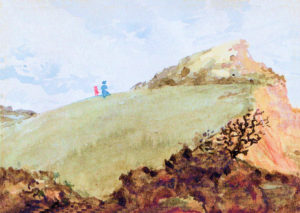 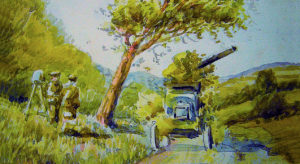 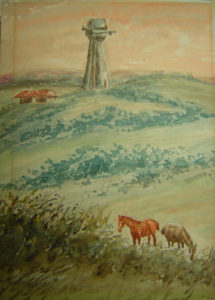 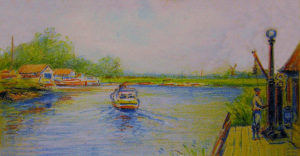 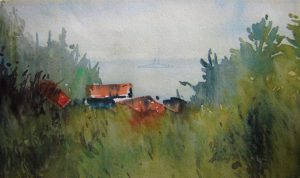 (an extract from Man of God by David Duff)

He was born in 1872 at South Heigham, Norfolk, the son of Charles Fountain and Mary Ann Page. He was one of four brothers. For generations past, back to the 16th century, the Page thread had run clearly through the tapestry of Norfolk’s story – from Saxthorpe and Attlebridge and from the water front at Blakeney to Norwich City and to the county boundaries.

The part which the four sons played is woven clearly on the tapestry. Charles Fountain Page was the chairman of the Briton Brush Company of Wymondham. (In 1746 Francis Allen was operating as a basket maker in the Haymarket, Norwich. He died in 1762 and the business was carried on and extended by Samuel Deyns, making baskets, patterns and clogs, brushes and dealing in paper. Samuel Deyns was the great-great grandfather of Charles Fountain Page. The business was successively in the hands of Samuel Deyns, born 1720, died 1806; John Page, born 1745, died 1827; Samuel Deyns Page, born 1782, died 1845; Samuel Deyns Page, born 1810, died 1897, Charles Fountain Page born 1839, died 1921, Edward Bailey Page, born 1875. The original Frederick John Page was a son of the second Samuel Deyns Page. The original business divided into two parts round 1897. At that time Frederick John Page took over as a separate business the printing, box-making and paper activities.) In his footsteps came his third son, Edward, and also youngest son, Dr. Cecil Page. Now the third generation carries on the name. Of the four brothers, Reginald, Algernon, Edward and Cecil, two followed the call of healing, one of the Church and the third the family business.

Reginald Page was educated at Felstead School and soon showed great promise in both athletics and art. He won his place in the school 1st XI football team and received the Art Prize for his painting.

Moving on to Clare College he distinguished himself playing lacrosse for Cambridge University. He matriculated at Clare in 1891 and took his BA degree in 1894. He subsequently studied theology at Ridley Hall, Cambridge, under Dr. Handley C. G. Moule, later Bishop of Durham and took his MA degree in 1897. He was ordained the same year by the Bishop of Southwell, to the curacy of St. Philip’s, Nottingham, where he remained for two years. He then accepted the curacy of South Walsham, Norfolk and shortly afterwards left to become curate of St. James with Pockthorpe, Norwich, a poor and extensive parish with a population of 10,000. In the interval between his duties he assisted at St. Stephens, Chelsea.

In the meantime, in 1898, an event took place which was to change his life, bring him great happiness and deep sorrow. In Nottingham he met Katharine Lash, the daughter of the Rev. A.H. Lash, C.M.S., India, and in 1899 Reginald and Katharine were married.

In 1901 the Rev R.C.Page was appointed Vicar of St. John the Baptist, Whaplode Drove, Wisbech, the parish consisting of an isolated Fen district of about 750 people, scattered over a district eight miles long.

On his appointment Reginald Page found the Church in a deplorable condition, and he set about the task of restoration and rehabilitation of the parish with energy and enthusiasm. By 1904 a Parish Hall had been built, fitted and equipped as Church Rooms.

It was not until 1907 that it was considered that sufficient money had been collected to allow work to start on the Church. In 1909, the year in which he ended his work in Whaplode Drove, Reginald Page published a pamphlet containing the story of the restoration of the Church and also an account of his stewardship while in charge of the parish.

In 1909 Reginald Page was appointed Rector of Trimingham. He had reached the place which was to be his real home for the remainder of his years.

On his appointment the new Rector of Trimingham again found himself faced with the problem of church restoration and he tackled it with the same enthusiasm as he had done at Whaplode Drove. The re-opening service was held on July 19th 1911.

When Reginald Page came to Trimingham there was no rectory and he and his wife lived in a house kindly lent by Mr. Buxton. But to one with the urge to build and restore ever in his fingers, he decided to build a home of his own. He leased for life from the Ecclesiastical Authorities the six acres of glebe land which lay between the church and cliff top and in a short space of time a bungalow had been erected. He called it “The Pilgrim House”.

Of those 44 years during which Reginald Page held Trimingham dear to his heart, ten were filled by war between Britain and Germany.

But Reginald Page was fretting to play a wider role in the struggle to win the war. 1915 found him working in the Red Cross car service at King Manuel of Portugal’s home for wounded officers at Brighton. In 1916 he was at Utrecht as temporary Chaplain caring for interned airmen and sailors. And in 1918 he achieved his ambition and went to France. For his work there, in the Church Army huts behind the front line, he received the Overseas War Medal.

Since his return from France Reginald Page had devoted much of his spare time to the carving of a somewhat unique war memorial, a tablet, bearing a carved panel, to be hung on the wall of the church. The unveiling took place on a Sunday morning in August 1921 by Mrs. J.H.Buxton. The people of Norwich had the opportunity of seeing the tablet at the Norwich Art Circle exhibition in October of that year. Two other carvings by Reginald Page in Trimingham Church – the one on the prayer desk depicting the “Finding of the Lost Sheep”, and that on the pulpit representing “Suffer little children to come unto me” had been previously exhibited in Norwich.

Mrs. Katharine Page lost two brothers and the shock undermined her health. Her husband noted the deterioration and decided that a change of air and surroundings would benefit her. So with great regret he resigned the Rectory of Trimingham, and accepted the Temporary Chaplaincy of Corfu.

On returning to England the Pages bought a house at Felpham in Sussex – Pear Tree Cottage. During their 7 year stay he restored Pear Tree Cottage, converting a nearby large barn into a dwelling, and an old cart shed into a house. He sold his property at Felpham and returned with his wife to his well loved Trimingham. In 1935 the Pages travelled to South Africa. On the return journey she died on March 7th peacefully in her sleep.

There are carvings in the Church in the chancel, around the pulpit and on the prayer desk, as well as Memorial tablets commemorating the 1914 War and the 1939 War, together with a sculpted scene from Corfu.

In addition to his carvings Reginald Page produced a great many drawings and water colours in the course of his life. He later joined the Norwich Art Circle. As expected it is the Norfolk scene that predominates – the broads, the coast, the ports and the ships, the Churches and picturesque villages. But in Corfu he found opportunities to indulge his talents, and there he did much of his best work.

Sir Alfred East often sketched in Trimingham and was happy to let the enthusiastic rector watch him at his work. The famous artist also gave some very good advice. But in answer to Reginald Page’s query as to whether he could recommend an art teacher, Sir Alfred replied,“You need none – they will only spoil you as an amateur. Nature is your master. Follow and be true to her.”